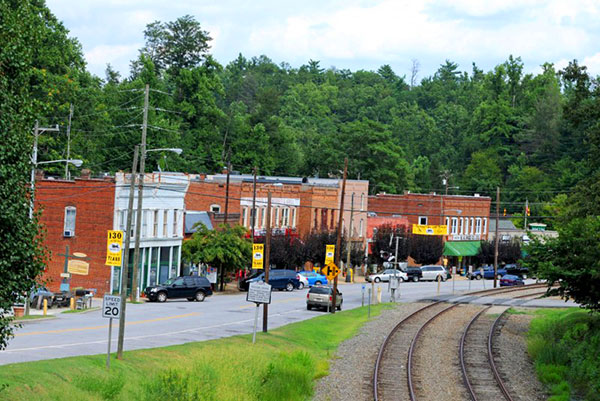 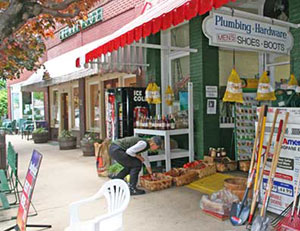 Escape the hectic pace of life in Saluda! This mountain town has been a favorite vacation destination for almost a century. Situated at the foot of the Blue Ridge Mountains, Saluda is filled with scenic beauty and warm community spirit. Pearson Falls is 268 acres of virgin forest, streams and a 90 foot waterfall. Many come and visit the town to explore the falls and the abundance of wildlife. Take a guided fly fishing tour or explore the waters by river raft. The town is also home to many festival and street fairs throughout the year.  There are many art galleries in and around the town, located nearby the numerous hometown restaurants and lodges. Saluda is rich in history and celebrates the past often through their historic districts. Take a stroll downtown through the tree-lined streets of lovely Victorian homes and visit the many distinctive shops along historic main street!

In the begging before the railroad, the town of Saluda had only two families, the Paces and the Thompsons. The Paces moved to the Saluda Mountain area around 1856 from Virginia. Around the same time, the Thompsons moved to the mountains from the west. Two of the young Thompson men built houses that were used as s stopover for stage coaches traveling between Spartanburg and Asheville. The homes were also used as trading posts, election center and a Post Office until the railroad was built. In 1881, the Legislature passed an act chartering the town of Saluda. The town covered an area “one mile square with the railroad exactly in the center”. Andrew Tanner was named as mayor of the tiny community. The town was named “Saluda” for the Saluda Mountains surrounding the area. For the first five decades of its existence, Saluda was one of the most exclusive resorts in the mountains, visited by wealthy Northerners and old established Southern families. Even through the Great Depression, Saluda was still popular due to the plentiful, cheap food. The local community has flourished and remained a tight nit town. Many people flock to Saluda for its beautiful scenery, shopping and the nostalgic feeling one can find in the town. 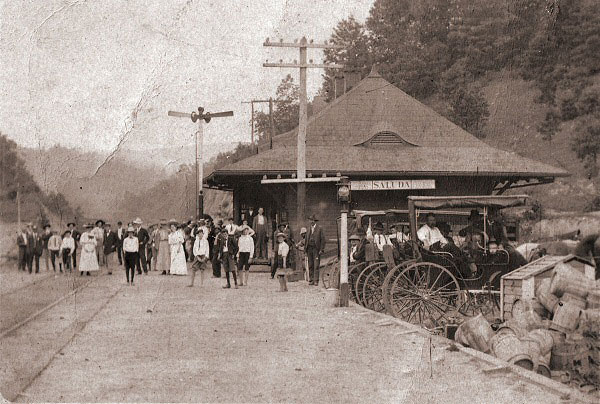 This fun festival is held in celebration for dogs and their people! The town will be filled with great food, live music, crafts, street dancing and a parade! The event began as a chicken supper fundraiser for the local Coon Club and has grown into an event that attracts over 10,000 people annually. The day will kick off with the Coon Dog Day 5K run through the historic downtown area. After the run, you can enjoy the  many local food and craft vendors with live entertainment on the main stage. The parade consists mostly of homemade floats, tractors, fire trucks, horses, motorcycles, dogs and of course, the Coon Dog Royalty Court. This festival is fun for the whole family and will surely have your tail waggin’! 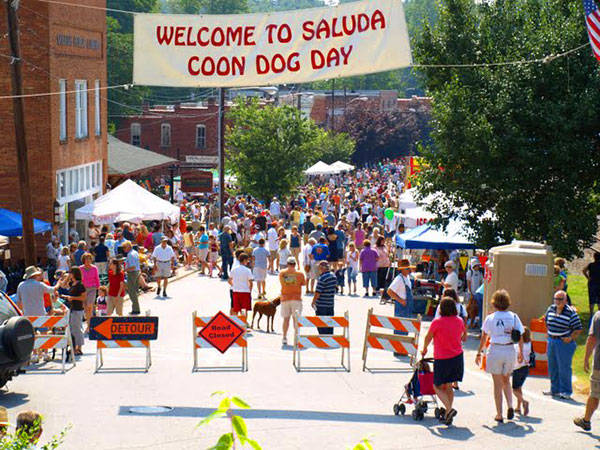 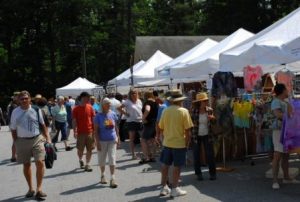 This little mountain time hosts a wonderful arts festival annually. With over 80 fine artists and skilled craftspeople, this all day event is sure to please. The artists will exhibit and sell many paintings, drawings, wood working, photography, pottery, jewelry, sculptures, stained glass, metal working, and much more. The festival will also feature live demonstrations of artists work and live music. Children will be able to create their own works of art at a special Children’s Tent.